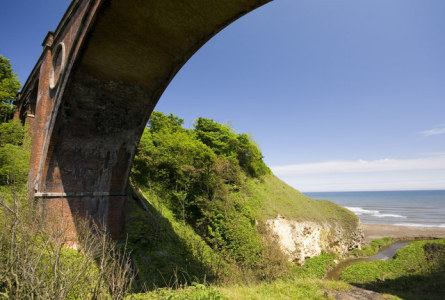 The rocks form the foundation upon which the distinctive landscape of the area has been moulded by various geological processes.

During a succession of Ice Ages, the landscape was scoured by ice and great swaths of glacial debris was dumped by the ice. This debris or Boulder Clay comprises of heterogeneous material of boulders, sand and clay and although it covers much of the area, it is most clearly seen as the material capping the Magnesian Limestone on the coastal cliffs. A belt of this material has also produced a rather interesting hummocky landscape between Easington and Hartlepool which was produced when two ice streams met producing morainic deposits.

Ice was also responsible for blocking the pre-glacial valley of the river Wear in the area of the modern Team Valley, causing the river to divert eastwards cutting a gorge through the Magnesian Limestone Plateau to reach the North Sea at Sunderland. As the ice melted, the erosion of more pronounced drainage lines formed steep-sided postglacial gorges, or coastal ‘denes’ – the best known of these being Castle Eden Dene. Other channels cut by meltwater maybe seen inland at Ferryhill Gap and near Kelloe.

Subsequently, further shaping by river and coastal processes has taken place. Along the coastal zone, the soft erodible Magnesian Limestone sea cliffs are subject to active coastal erosion and exhibit a number of typical features including caves and stacks reflecting the differing degrees of resistance within the rocks. A ‘raised beach’ at Easington was formed after the last ice age and a subsequent rise in the land has raised the wave cut platform 30m above the current sea level.