Front of the whole site before restoration 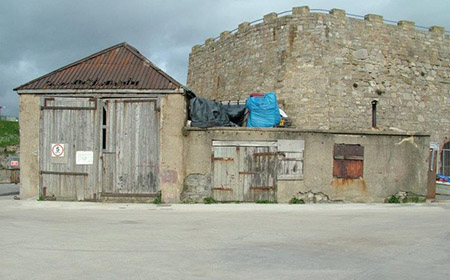 The Lifeboat house was in very poor condition. It was not watertight. Some of the structure and the main doors were rotting, In the past the building had been unsympathetically rendered with concrete. All in all it and the adjacent Fisherman’s and Trimmers’ Huts were not in a good condition.

The Trimmer’s Hut and Fisherman’s hut were taken down. A new display space was built adjacent to the Lifeboat House. The concrete render was removed and the structure was repointed with Lime (this was used as a training opportunity for staff and volunteers). The windows and doors were refurbished and the roof was replaced. A new set of glass doors was installed inside the Lifeboat House so that the wooden doors could be open and the Lifeboat could be seen by the public outside, whilst remaining protected from the weather.

The building is now the home of the East Durham Heritage Group. They are using it to display the George Elmy lifeboat, which they restored, 50 years after it sank at Seaham in a disaster in November 1962.

You can find details of the restoration on the East Durham Heritage Group’s website. The Lifeboat House is open to visitors Thursday to Sunday each week between 10am and 3pm. You can contact the Group on Email: eastdurhamandcoastalheritage@oneuk.com