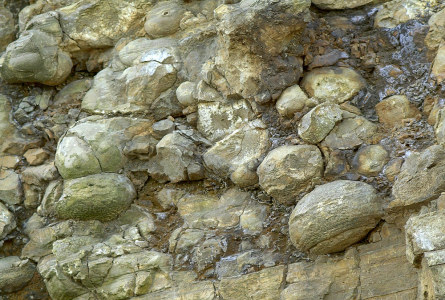 The area boasts an exceptional array of rocks which are of considerable geological, scientific and educational interest, many are without parallel in either the UK or Western Europe and are considered to be of international importance.

Many eminent geologists including one of the founders of modern geology, Adam Sedgwick in 1829, have been enticed by the extraordinary rocks of the area which include the Concretionary Limestone – locally know as ‘Cannonball’ Rocks which contain ‘the most remarkable patterns in sedimentary rocks anywhere in the world’. These ‘Cannonball Rocks’ are exposed in the cliffs from Trow Point to north of Seaham, and in quarries inland, most spectacularly at Fulwell.

The internationally renowned fossil rich Marl slate (or shaley limestone) also contains beautifully preserved fossil fish, together with rarer reptile, amphibian and plant fossils. The quarries south of Middridge have been the source of the best preserved Permian plants found in England. The only British example of a very rare fossil of a gliding reptile Coelurosauravus (meaning “hollow lizard grandfather”) was discovered in the Limestone Landscapes area and can now be seen on display in Sunderland Museum.

Coarse-grained sandstones known from their colour as the Yellow Sands, locally underlie the Magnesian Limestone and outcrop along the foot of the escarpment. These sands are the remnants of a series of desert dunes formed in Permian times prior to being flooded by the Zechstein sea. Crime Rigg and Sherburn Hill working quarries show the best examples of the complex, interdigitating cross-bedding typical of these Yellow Sands.