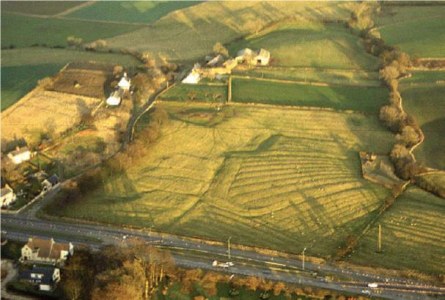 During medieval times the area was important for agriculture, commerce and manufacture. Much of the area was owned by the medieval Benedictine monastery at Durham and by the ‘Prince Bishops’ who between them controlled all of the land ‘between the Tyne and Tees’. It was these monks that were the first to exploit the rich mineral wealth of the Plateau, beginning a long history of mining and quarrying in the Limestone Landscape area.

The landscape and settlement pattern established during this period provides a good deal of foundation of the landscape we see today. The distinctive rig and furrow ploughing pattern, often cutting across modern field boundaries survives around many villages of medieval origin.

A number of deserted medieval villages have been discovered within the Limestone Landscapes area and have been designated as Scheduled Ancient Monuments due to their national importance including deserted villages at Sheraton and Coxhoe.

The only substantial medieval town on the Magnesian Limestone was Hartlepool with Sandwell Gate, part of a defensive wall built to defend against Scottish raids still surviving.

Surviving buildings from this era are few and far between but a few exceptions include Hylton Castle near Sunderland, a medieval manor house – Seaton Holme at Easington and two smaller hall and tower houses – Ludworth and Dalton.