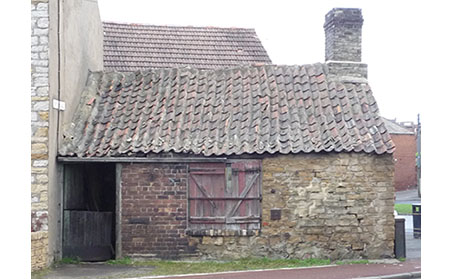 We have worked with the owners of the building, John and Linda Guy, and Durham County Council Technical Specialists, a Conservation Architect and Specialist Contractors restoring the late 18th century blacksmith’s shop in Hetton from March 2013.

Our Project timescale was initially four months, which was due to complete in July 2013, however as with all old buildings this was dependant on what we found when the building was taken apart. The biggest piece of work was thought to be the roof and especially the timbers…..

When we removed the rotten roof timders we found that they were all that was supporting the gable end of the building. None of the stones in the gable end were tied in and all that was holding them together was dust. We needed to take the furnace and chimney down, put in foundations and then rebuild it using the same stones, this time tying them together with steel. The majority of the timbers in the roof had to be replaced, along with the pan tiles. Beamish Museum donated pan tiles from their collection to this end along with some glass pan tiles, railway sleepers and even some light shades! The work was finished in September 2013.

The Smithy has received a number of awards, or has been shortlisted for them:

The Smithy is usually open between March and November on the first Saturday of each month from 10am to 2pm for demonstrations.

If you want to check whether the Smithy is open, or arrange a visit, please contact Lynda Guy on Tel: 0191 548 0122 or email: fawnmick@hotmail.co.uk