Hawthorn Hive Kilns from above before restoration 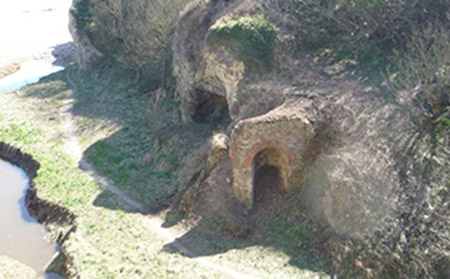 The Hawthorn Hive Lime Kilns are located at the mouth of Hawthorn Dene, just north of Easington Colliery.

When surveyed in 2012 one of the three arches had collapsed completely, a second arch was mostly collapsed, however a third arch of the kilns was largely complete. It was agreed that we would work to restore this arch.

The site was problematic to reach, due to its remote location, however Lafarge Tarmac allowed our contractors to set up a site office in Hawthorn Quarry. The contractors worked with Durham Wildlife Trust to ensure that there was no damage to the wildlife at Hawthorn Meadows when the equipment and materials were carried down into the Dene and along paths to the Hawthorn Hive site.

Natural England gave permission for us to use stones from the Dene Stream bed to rebuild the retaining wall adjacent to the kilns and volunteers from National Trust cleared scrub from around the kilns.

During the restoration work the contractors found three WW1 barded wire fence poles that had been ‘fly tipped’ within the kiln, after the end of WW1.

The kilns are accessible via a public footpath that runs down to the mouth of Hawthorn Dene.