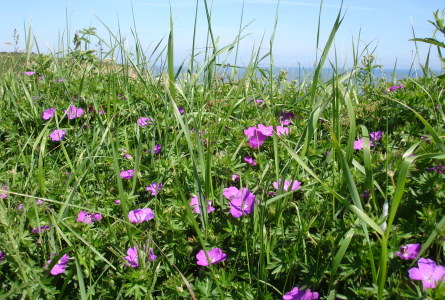 The coastline here is the only example of vegetated sea cliffs on Magnesian Limestone exposures in the UK.

Their vegetation is unique in the British Isles and consists of a complex mosaic of grasslands, fen, flushes and wind-pruned scrub. Within these habitats rare species of a predominantly southern or northern British distribution often grow together forming unusual and species-rich habitats of great importance. Notable nationally and regionally scarce species include Bird’s Eye Primrose, Brookweed and Marsh Helleborine.

Small areas of sand dune occur at the very southern tip of the coastal zone forming part of Hart Warren Dunes Site of Special Scientific Interest (SSSI). In common with other characteristic vegetation types of the Limestone Landscapes, these dunes are influenced by the underlying geology, and contain many species characteristic of both northern and southern British dune floras. The fixed dunes are of particular interest for their species rich flora and are characterised by species such as Bloody Crane’s-bill, Burnet Rose, Purple Milk-vetch and Lesser Meadowrue. A number of rarities are also found, such as Petalwort, Dune Helleborine and Coralroot Orchid.

The coastline also holds important numbers of both breeding and over wintering seabirds including Little Tern, Purple Sandpipers, Turnstones and Knots and the cliffs at Marsden Bay also support a well-known seabird colony which includes Kittiwake, Fulmar and Cormorant. The Crimdon colony of Little Terns, which breed annually here between May and August, is of international importance. Indeed there are several Sites of Special Scientific Interest along the Durham coast and alongside designated Coastal Heritage Status, most of the Durham coast is a National Nature Reserve.

Coal mining predominated along the Durham coast through the 20th century, however after the pits closed in the early 1990s a comprehensive regeneration programme called ‘Turning the Tide’ has transformed this coastline into a beautiful and clean coastal stretch, and is now a designated Heritage Coast and National Nature Reserve. For more information visit the Durham Heritage Coast website.