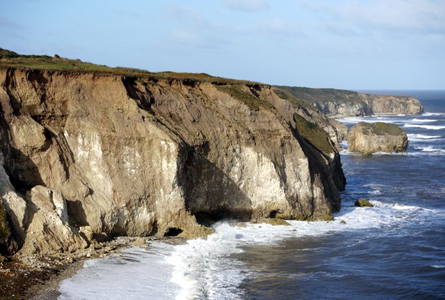 The spectacular and varied coastal cliffs are without parallel in Britain and most of Western Europe.

In addition to numerous important exposures of Permian rocks and glacial deposits, the Durham coast includes a number of characteristic coastal landforms. Local weaknesses in the Magnesian Limestone have been exploited by marine erosion processes leading to the formation of stacks, caves and arches. The best known of the stacks is Marsden Rock between South Shields and Sunderland.

At Blackhalls Rocks a number of spectacular dome-like structure can be seen in the dolomitic limestone exposed in the cliff and foreshore sections. These domes are complex growths of algae that formed through the trapping of fine mud by films of algae in the warm, shallow saline waters 240 million years ago.

Between Hawthorn Hive and Horden Dene, examples of wave cut platforms can be seen. These are more or less flat areas of bare rock cut by marine erosion at beach level, leaving expanses of Magnesian Limestone exposed on the beach.