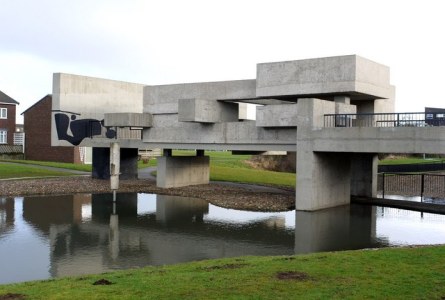 Large quarries are perhaps the sole working reminder of the area’s large scale industrial past, along with the tall industrial buildings such as Thrislington Works with its prominent chimney.

Most major coal mining structures have been demolished and the sites reclaimed leaving only the occasional headstock wheel remounted as a memorial to mark a colliery’s passing, although evidence still survives of the social side of mining in the form of housing, institutes, working mens’ clubs, schools, colliery offices, pit disaster memorials and the like.

It was also during this period that both world wars took place and the area holds some notable coastal defence features. During the Second World War the Durham coast was a target for bombing because of its importance as a coal mining area and as the location of a number of ports and harbours where a variety of ship building and engineering works provided the equipment required by the armed forces. As a result an elaborate series of defences and diversions were constructed along the coastal plain. In addition to pillboxes and tank traps, defensive trench systems survive at Crimdon Dene, Blackhall Rocks and Castle Eden Dene.

The standard of the housing in many of the mining villages was called into question during the post war period and resulted in widespread demolitions and the re-housing of families in purpose built local authority housing, often added as small estates onto the fringes of older villages resulting in a third wave of settlement in the area. The peak of this rebuilding and re-housing with its emphasis on modernity, raising of standards and attempts to find employment other than heavy industry was to be seen in the new towns built at Newton Aycliffe, Washington and perhaps above all at Peterlee where modern design, inspirational architecture such as the Passmore Pavillion and landscaping were attempted to be brought together.